By buying a Katana it is possible to practice Tameshigiri. From the ancient Japanese tradition, Tameshgiri is the art of target cutting. Tameshigiri literally means "test cutting" and in the Edo period (17th century) this was done to test the quality of Japanese swords. In some cases, criminals were executed by tameshigiri, but often corpses were also used to test the cutting power.

In many sword martial arts such as Shinkendo, Iaido, Batto, Kenjutsu and Tameshigiri of Eishin-Ris it evolved into an exercise to train the skill with the sword in a realistic way.

Sort by:
Best sellers Relevance Name, A to Z Name, Z to A Price, low to high Price, high to low
Showing 1-1 of 1 item(s) 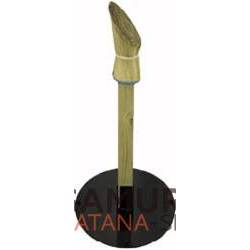