Swords are the ancient weapons that were not originally made for hunting. In appearance, a sword, of course, resembles a large blade and has been a dangerous weapon for combat for many centuries. The blade is often large and remains easy to handle due to the counterweight in the handle. Swords have been developed almost all over the world and that the complex on the definition of a sword is well defined.

You can hold a sword with one or two hands and with the elongated steel blade you can stab and cut.

The smith who can forge the swords and its users have always had a high social status. The sword gave power and status to its owner, and the blacksmith was always at the forefront of steelworking. Most swords were personally made by the decorations and independent of their functional use.

In addition to swords, there has always been a wide range of axes, daggers, knives, cleavers, throwing knives, spears and halberds.

In hand-to-hand combat on horseback or on foot, a sword was used. In addition to the longer sword, a shorter sword was also usually developed. This is very clear with the Japanese swords or katana and the combination with the wakizashi or shorter sword. You can also sometimes see the development of very large swords that were used against the cavalry. You would then hold these swords with both hands.

The ōdachi (great sword) or nodachi (field sword) are swords used by the samurai class in feudal Japan. 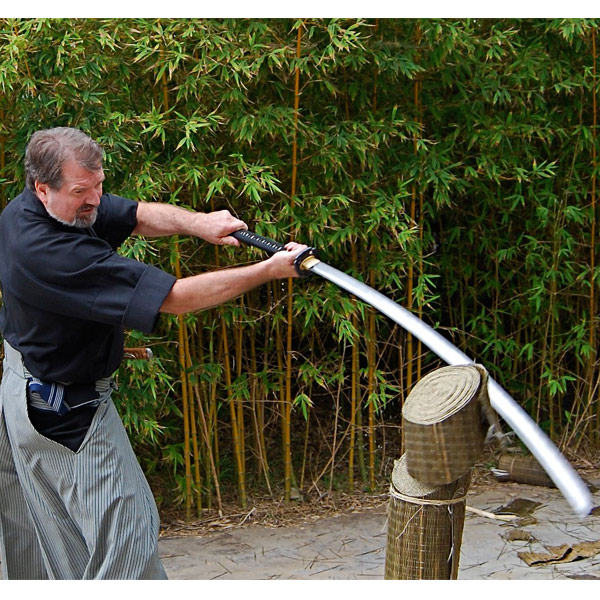 The ancient Romans had, in addition to the Spatha, the gladius, a shorter and broad sword that was used for stabbing and they were very effective in combination.

The use of wooden training weapons was done in many places in the world for safe training. Your strength also increased if you often trained with a wooden sword. In Japan they used the bokken or bokuto, a wooden sword made of oak.

You carried the swords in a sheath on your hips or on your back. A sheath provides safety, protection of the blade and less chance of oxidation.

In medieval swords, the sheaths were usually made of cloth or leather and often worn on the hip. With the katana, the sword was in the saya which was made of wood and attached to the obi with sageo. Carrying a sword on the hip gave speed to the drawing because it was quick and easy this way.

A very important aspect of a sword is the balance. An experienced blacksmith already thought about this after forging the blade by working with the weight distribution.

A point of balance close to the handle usually makes the sword easier to handle and with less energy. The more forward a balance point is, this sword can develop a greater power when cutting or hitting. The perfect balance differs per fighting style and practitioner.

The blades or blades are made of metal so that you could make a sharp cut by forging and hardening them. Before steel was used, copper was widely used. The ancient swords were made around 3300 BC and found in Turkey.

During the Bronze Age in Europe, most swords were often longer daggers and these increasingly developed into melee and stabbing weapons. Most swords in

The swords in the Iron Age, the quality of the weapons was initially very poor, but this differed greatly per smith and region.

In the Romans, high and low carbon steel was forged and had the properties of a flexible but strong blade. These different hardnesses and carbon give the blades a beautiful motif. Forging the iron several times and allowing it to absorb carbon each time was a very labour-intensive and expensive process. A name for these swords with layers is also called damask.

In order for a blade to obtain the correct hardness, a relatively high carbon content is required. The blade must be heated to a high temperature and then quickly shocked or cooled. In this way you get the most optimal properties with a sword.

In ancient Japan iron sand or tamahagane was used and the steel was frequently folded and forged. The core was forged from softer steel and the edge from harder steel. The Japanese schools all had their own forging and hardening techniques to produce a katana.

Below an authentic Japanese sword of the Kaifu School from Japan.

A good sword must be sharp so that you can stab and cut well with it. You have swords with a single

Massive swords can sometimes become too heavy and to be able to handle them flexibly and quickly, many blades have grooves or grooves on both sides. These can be half grooves, double grooves or just a single groove. With a katana you call this a bo-hi or longitudinal groove.

Most swords have the tang or stinger in the handle. This is the invisible part of the sheet. With a functional sword this is always full-tang, so the part of the blade that continues into the handle and where the blade and the tang consist of one part.

With Medieval Swords you can distinguish the following parts.

The hilt is what you hold and is the handle and the crossguard. The guard bar is a metal bar between the handle and the blade. This ensures that you can stop the opponent's sword with a slap and that your hands are well protected. You this that in the course of the Middle Ages this cross-guard became increasingly larger

The pommel is located at the bottom of the handle and ensures balance and that the handle can be properly secured.

You can say that the tsuba in a katana serves about the same purpose as a cross-guard. This protects your hands and ensures a good balance. The koshirae also gave space on the sword to personalize and provides status.

You will find in the history of mankind many swords and mythologies and famous of these are the sword of Attila, the king Arthur sword and the Excalibur. Of course also the Sword of Goujian and of course the enormous Norimitsu Odachi. The swords and axes of the Vikings and the well-known Japanese Katana also appeal to many people. You can buy a sword from us that meet the technical requirements that you may set.