The Katana also known as the Samurai Sword is the Japanese Sword and originated a long time ago. The rich history originally began in China and actually lasted until 1868, when the samurai class was abolished. Around 900, the first swords are known in Japan, which they call with Jo-Koto (old swords).

Samurai warriors followed the path of the warrior, or the Bushido. The Japanese katana was the soul of the samurai, and he always carried the sword with him.

The shape of the blade is curved with an edge on one side. Traditionally, the katana was only used by the samurai. Usually the katana (sword) was worn in combination with the wakizashi and this was called the daisho. These weapons also represented the social power and personal honor of the samurai.

In open battles, the katana with its longer blade was used for combat and the wakizashi and tanto more suitable for stabbing / mowing and close combat.

Each sword has a unique composition, depending on the school and blacksmith. Two swords will therefore never be the same with authentic Japanese swords.

Nihonto is the word for sword in Japanese. To-Ken is only used with very old swords from Japan. Ken is also used but originally it was a sword with a cut on both sides. So that is not the Japanese sword that one usually talks about, the shinigo zukuri form.

Parts of a Samurai Sword

A katana is made and assembled from various parts that fit very closely together.

Nagasa: length of the blade from the mune-machi to the kissaki (point)

Tang: the part of the blade in the handle, which you also call Nakago.

Hamon: the pattern formed on the edge of the blade that arose during the differential hardening process.

Yaiba: the cutting edge of the blade, this is also called hasaki or ha.

Hi or Bo-Hi: a longitudinal groove for a lighter and faster sword, and the Hi also ensures that forces are better absorbed by the sword when impacted.

Mei: signature of the blacksmith, you can find this on the nakago or tang.

Moto-Haba: width of the blade at the height of the hamachi (at the habaki)

Moto-Kasane: thickness of the blade at the height of the hamachi (at the habaki)

Saki-Haba: width of the blade at the height of the kissaki

Saki-Kasane: thickness of the blade at the height of the kissaki

Yokote: line between the kissaki and the rest of the blade

Monouchi: part of blade that you usually use to cut or chop

Mekugi-ana: the hole in the tang that secures the blade in the handle

Mune: back of the blade or blade

Shinogi: the ridge of the blade which starts with the kissaki and extends to the tang

Shinogi-Ji: part of blade that runs from the shinogi to the mune

Ji: part of blade which starts from the shinogi to the hamon

Ha: is the edge of the blade

Parts of the handle or tsuka and the saya or sheath

Kashira: this is the pommel located at the end of the handle.

Tsuka: the handle of the sword that is wrapped with Ito, this will often be cotton, leather or silk.

Samekawa: this is ray skin which is under the Ito or wrap. Ensures that the ito stays in place and gives extra grip.

Menuki: small decorative sculptures on the samekawa, these are placed on the ura (inside) and omote outside in different places, so that the carrier could feel in the dark whether the sword was being worn correctly.

Mekugi: small bamboo pins to secure the tang in the handle.

Fuchi: metal hilt that holds the tsuka together.

Seppa: metal rings that have the function of bridging the distance between the tsuba and tsuka and bring firmness to the handle. (aka as spacers)

Tsuba: Japanese name for the hand guard of the sword. In the old period often simple and later the designs became more complex and aesthetic. Provides protection for the hands, as well as not slipping your own hands towards the blade. Can also influence the character and balance of the sword.

Habaki: the metal collar at the base of the sword. Ensures connection, stability and sturdiness of the blade and the handle.

Saya: the sheath is used to properly protect the samurai sword when it is not used against the elements and prevents accidental injury.

Sageo: The sageo is a cord that secures the saya on the warrior side for easy access.

The mekugi-ana can fix the blade in the handle. These are the holes in the tang that secure the blade securely in the handle or tsuka. A functional one sword is always full tang. This implies that the tang is completely in the handle and that they are firmly secured with mekugi (bamboo pins). You can find the signature or mei on the nakago or tang. You can click here if you want to know more about Full-Tang Swords.

Horimono are engravings of, for example, gods or dragons, but can also be combined with texts in Kanji. You can find this on the blade of the sword.

These are longitudinal grooves that make the sword lighter, more agile and faster. The groove is consistent over the entire blade, maintaining the structural strength. The longitudinal grooves also cause a whistling noise during handling (tachikaze). This gives the user feedback on whether the sword makes the right angle during a stroke or technique. Many people also call this groove the blood channel or blood groove. The idea behind this is that the sword cannot draw a vacuum and then the blood cannot flow completely over the blade during a cut. It is more likely that this grooves serves to create a faster and more agile sword. Iaitos used in sword fighting arts are always provided with a bo-hi. These sword fighting arts are for example in the Iaido, Katori Shinden ryu, Ken-jutsu Shindo Munen-ryu, and Muso Shinden-ryu and Battojutsu. 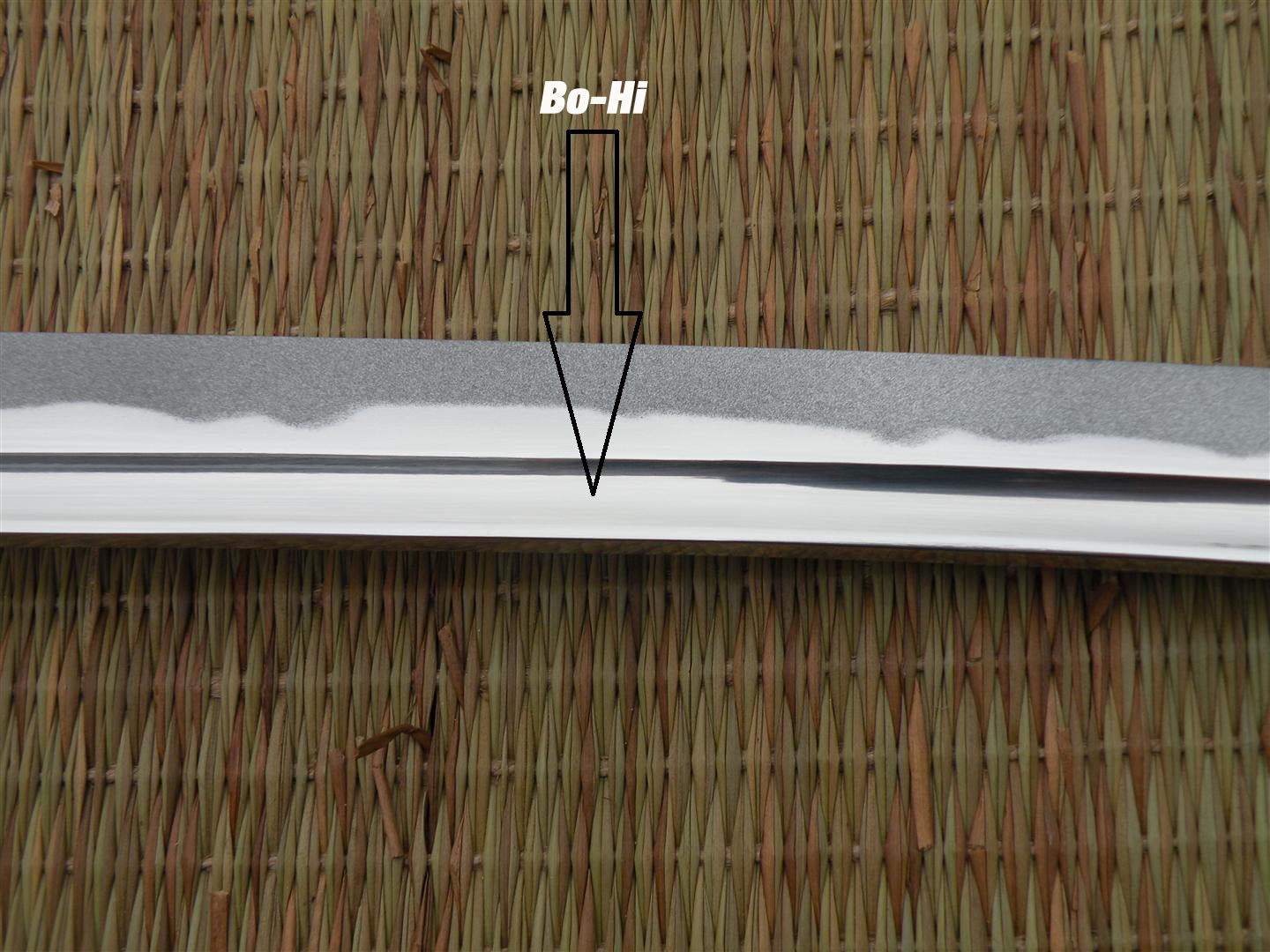 The point or kissaki is an important characteristic of the sword and it gives strong character to the appearance. This can be long (o-kissaki), medium (chu-kissaki), short (ko-kissaki) or even crooked back (ikuri-okissaki). With good polishing, it will come across as smooth and three-dimensional. This geometric part will be bordered by a straight line that you call yokote. 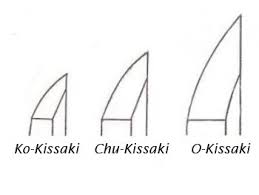 This is the ridge line that runs from the yokote to the nakago. It is a clear dividing line between the sharp and oblique part of the blade, with on one side the edge with hamon and ji. Another side is the shinogi-ji and mune (back) of the sword blade. A higher shinogi will be suitable for hard targets, due to the angle of the cut and more mass of the blade.

The back or back of the blade is called mune. This starts with the Mune-machi and continues to kissaki from the sword blade. During some applications, the mune is used to block. The blade will crumble less or break with heavy contact.

A hamon is the result between fire, water and steel and that makes a natural hamon attractive too. The hamon literally means "cut pattern" and this visual effect is created by the differential hardening of the blade. In combination with professional polishing this ensures a great aesthetic value of the sword.

In fact, the hamon is created by tempering the steel. The application of clay to the blade ensures that the edge cools faster than the parts covered with clay. This is also called differential hardening. The Ha or edge is then very hard and can therefore be sharpened very sharply. The back is relatively softer but tougher due to this operation and can therefore absorb better hits. The breaking of the blade is hereby greatly reduced during use on the battlefield.

Due to the differential hardening, the edge consists of hard martensite steel and the core with back is made of perlite, which is tougher and softer.

In addition to the fact that a Japanese sword is a deadly weapon, these swords are also handcrafted artefacts. The hamon contributes greatly to this. A professional polisher ensures that you can look into the steel. His goal is to fully express the idea that a blacksmith had when forging a sword. Good steel which is hardened correctly makes a clear hamon with different patterns. These natural patterns depend on the way the clay is applied and are Suguha (straight), Midare (faint very irregular wave), Gunome (regular zigzag wave) and Notare (faint irregular wave). You have many more patterns and these are also often divided into the width of the hamon.

In ancient Japan, the goal was a sharp-edged sword with a tough back or core that will not break easily. This sharp cut had to be able to cut very efficiently because this was a matter between life and death. A hamon is a by-product of this purpose, but nevertheless an aesthetic hamon remains insane to look at.

Many swords also have an artificial or false hamon and are not hardened differentially. With a reputable seller who knows what they are doing, this will not happen quickly and you can buy a sword and assume that the hamon is genuine. 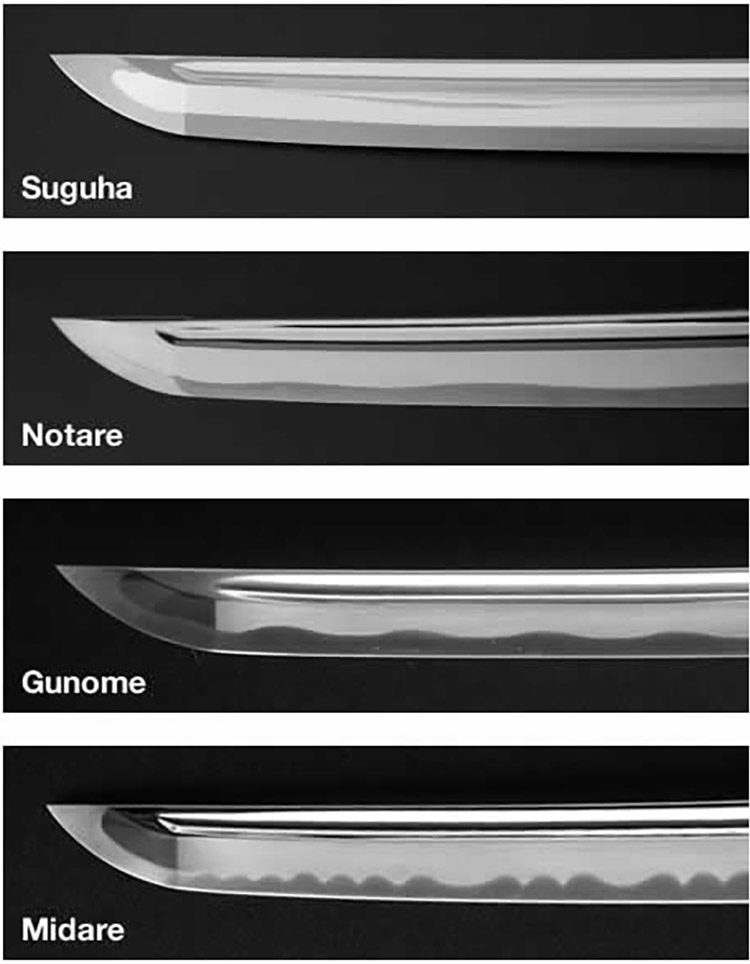 Hada or folding pattern often looks like a wood grain structure and is the result of forging and folding the steel. The hada reflects the technique that the blacksmith used to forge the steel. If the blade is professionally polished, the hada along with the hamon will be clearly visible on the blade.

The patterns have a number of basic shapes and these can vary in density and veins (layers). Forges in feudal Japan wanted swords with a homogeneous structure so that the sword was just as hard or tougher on the parts of the blade where needed. Because the tamahagane was not equally pure and hard everywhere, the steel was folded.

Tamahagane is steel made with the ancient Japanese tradition. The carbon percentage is usually between 0.5 and 1.5%. Tamahagane is made from iron sand (satetsu) and usually comes from Shimane (Japan). The iron sand is put in a Tatara, which is a traditional clay blastfurnace. In this furnace the iron sand is mixed with carbon so that pieces of tamahagane with different hardness are produced.

Swords are usually folded between 8 and 16 times to make the steel homogeneous. So if a sword is folded, you can use the example below to discover how many layers this blade will have.

You often see in advertisements that a sword has been folded 1024 times, so this is completely nonsense. The sheet is folded 10 times and has 1024 layers. Often 12 folds is enough, more folding does not add extra value.

But the patterns indicate how often a sword is folded and in which direction. Hada can therefore have small and large variations in patterns and also mixed techniques.

Folding the steel is a complex technique for forging and only the Chinese forges, or the Japanese forges with much experience, can produce aesthetic hada without flaws in the blade. 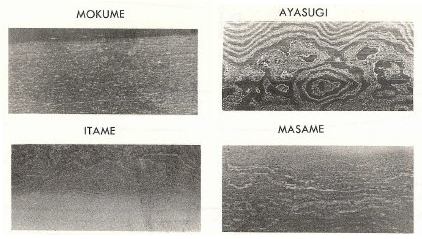 In our specialized webshop you can buy functional (battle ready) swords with a full tang. These are suitable for the practically oriented Japanese Sword Fighting practitioner as well as the demanding collector.