What exactly are medieval swords? And in what ways were these truly European swords now made?

It is a fact that people have been trying to kill each other for various reasons since the beginning of time. This was usually for power, food and expansion. In the process, many weapons were developed and one of the most important and appealing is the sword.

The development of the sword in Europe began around the 12 century B.C. which ran roughly parallel to the beginning of the Iron Age. Basically, most swords evolved from the daggers of the Bronze Age. 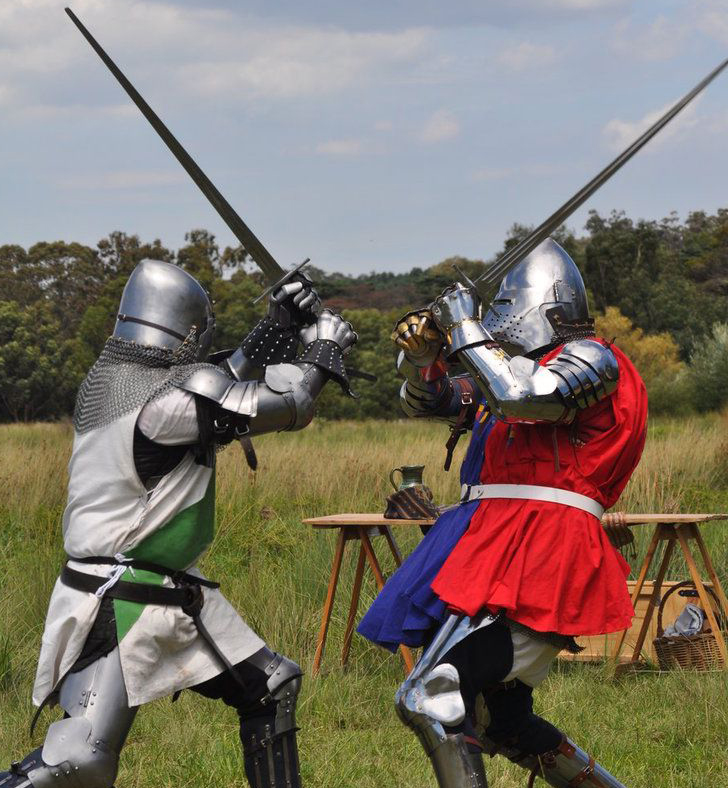 The really big development falls during the Middle Ages which started around 500 A.D. and ended around 1500 A.D. The Middle Ages is also called the period between antiquity and the early modern period (15th to early 19th century).

Because of the geographical differences and therefore great fragmentation the development of the sword was not linear but went differently in different parts of Europe. This was due to the fragmentation of political authority and strong divisions between the nobility, with military and peasant classes. Socially, it was mainly an agrarian economy in most parts.

But this division is also reflected in the design and weight of the swords, which arose from the different sword styles, periods and blacksmiths. In many places you do see the emergence of the longsword, which was often used for striking, stabbing and cutting, also known as the three wounds. In addition to this sword, of course, you also had the daggers, sabers, clubs and spears. European swords are often straight and are designed for striking and cutting. The Japanese sword which is curved, and thus has a cut on one side, is designed more for cutting.

Many ancient swords have been found in burial sites, which suggests that the sword was considered to be the most powerful object one could own.

It was also common to administer physical punishment with it, such as amputation of body parts or even decapitation. The sword was an honorable weapon and a privilege and reserved for the nobility and higher classes.

The normal construction of a sword is a blade and hilt. The hilt is then attached to the sting of the blade and the blade then extends into the hilt.  The blade then consists of two sharp blades and a point. Often there is also a groove in the blade to make it lighter and more maneuverable and to dissipate the forces created in the blade during combat.

The handle or hilt also has a pearl bar, pommel and the grip. For hand protection the quill and pommel or knob ensures proper balance of the sword and likewise holds the hilt in place. The grip or hilt is made so that there is a good grip of the sword.

The medieval period is divided into the Early, High and Late Middle Ages.

The spatha was the precursor to the European Swords of the Middle Ages. The spatha was a straight sword between 50 and 100 cm which was used in the Roman Empire between the 1st and 6th century AD. Initially it was only used by the cavalry. The Romans also had the gladius, which was a shorter sword used by the Roman legionaries. The blade of the gladius sword was about 60 to 70 cm long with a 4.5 centimeter wide blade. From the word gladius, the word "gladiator" is also derived, as it was also used during gladiator fights. The Romans probably adopted this style of sword from the Punic Wars, between Carthage and the Roman Republic. In practiced hands, the gladius was an extremely effective short sword, which was suitable for stabbing, striking and cutting. The legionnaire's permanent equipment also included the pugio or dagger, a double-edged knife, for defense and as an aid to eating.

Forging a sword in Roman times was done by forging high-carbon and low-carbon steel together in strips. The patterns created by this are also called damask.

During the Middle Ages, sword technology improved and in practiced hands the sword became a very sophisticated weapon. Initially it was based on the spatha style.

Thus, swords in the early Middle Ages were simple in design with a symmetrical sharp blade with sometimes a rounded tip and simple parry bar or thrust plate.  With used these swords with one hand but were very suitable for striking and cutting. Usually the weight was around 1 kilo and in combination with a shield extremely effective. The armor at this time consisted of chain mail and hardened leather. The grips of these swords were short and one-handed and about up to 90 cm long.

During this period, different techniques became known for forging swords, which per differed from area to area. The quality of these swords sometimes also differed greatly. One common technique was pattern welding. This technique involves folding and forging steel into bars with different carbon hardnesses. By forging this around a core of softer steel, you got a sword that could be very hard and sharp as well as absorbing blows. The blacksmiths worked the steel in this way and the swords got unique visible patterns on the surface.

During this period, the quality of medieval swords went a little further. The blades were now suited and hardened and were now found in many areas. Of course, a special place in the period is the Vikings.

The Vikings who were known on their brutal looting throughout europe, greenland, russia and used swords and axes. These Vikings operated from Scandinavia and were descended from the Normans (Germanic people). The Viking sword descended from the Franconian sword which came from the Roman spatha.

The steel from which Viking swords were forged was monosteel in addition to the pattern-welded damask steel. The blades were made of a high quality with high carbon content and underwent proper heat treatments. It was not uncommon for the Vikings to name the swords and these brought status, power and honor. Even the Vikings were buried with their swords. Most known pattern welded viking swords had the name ulfberht. The vikings also began to attach parry rods or quills to these swords. The viking swords could cut and stab very well and the sword certainly had a great influence on their successful method of warfare.

The European sword in the high Middle Ages is of course the sword which is often categorized as the knight's sword. It is straight sword with a double-edged double blade and cross-shaped. In fact, you could say that the knight's sword of the Middle Ages was developed from the Viking sword.

Swords in the late Middle Ages 14th and 15th centuries

Due to the increasing armor in the 14th century, it was necessary to develop a more powerful sword. In this time also the bastard sword emerged which you could hold with 1 or 2 hands. With one hand you could also hold a shield or buckler and still wield a sword with great power.

One often thinks that large triangular shields were always used but this was often only during tournaments so that the family coat of arms on the shield could be properly depicted.

Full body armor was also introduced and with it the longswords with sharp strong points became even more popular. The quill bar also widened and now the two-handed longsword became more and more popular. These two-handed swords had much more striking power and stabbing power. Also, fighting techniques became more and more important because you had to hit the weak parts of the panthers such as in the sights or genitals. You can say that in the late Middle Ages for the longswords were used.

Thus, the Middle Ages came to an end and passed into the Renaissance with firearms, rapiers and swords. So the European sword has had a long development and to date a sword you have to look at the blade and the hilt and even then there are so many variants that it is sometimes extremely difficult to date a particular type.

If you want to know more about sword types from the Middle Ages you should check out the Oakeshott typology created by historian Ewart Oakeshott. He has made extensive descriptions based on physical sword forms from about the 11th to 16th centuries.

It is also a fun fact that medieval swords were expensive at the time. Not nearly everyone could buy a sword. Usually its value was a few cows so if you could afford that then a good sword was within reach.

In my webshop it is possible to buy a quality replica medieval sword. Take a look around, I also have medieval swords for re-enactment.