What exactly is Damask or Damascus steel?

Damask steel or damacus is the result of a technique to produce steel that consists of a large number of layers of steel that are forged together. Originally from India, this steel is named after Damascus, the capital of Syria. In the past it mainly concerned swords that were made and bought there, but later it also referred to the way of forging and the typical surface patterns. The swords made of damask steel had beautiful patterns and stripes.

The goal then was of course to improve the properties of the steel so that the best weapons were available. The chunks of steel were forged to the desired length and then folded and forged again. This was done several times so that you can also talk about folded steel with many layers.

These swords were known to be very tough and could be sharpened very sharply with a resilient cut. The damask steel has a well-known name and has even spawned legends such as the ability to cut gun barrels or cut hair that falls on it in half. Damascene steel used to be traded and thus ended up in Europe where it became known for swords and knives.

Damask is actually a collective name for two different techniques or types of steel, the wootz steel and pattern-welded steel. Both of these techniques produce patterns and colors.

Wootz steel or Woets is a hard cast steel and it was produced in India. This would be made around 200 BC itself. The steel contained a lot of iron carbide (cementite) which crystallized out during start-up or cooling and cartridges. With the production, a precise ratio of temperature and length of heating was very important. It is suspected that ore for Wootz steel came from one particular mine, which mainly had to contain phosphorus and elements of vanadium and molybdenum.

Wootz is a type of cast steel in a crucible in which the carbon content was dosed in such a way that the steel did not become too hard (due to too much carbon) or too soft. The patterns are mainly due to d carbides and can be clearly seen in the steel as dark and light shades. The rolls or billets that were created were sold or forged. The carbon and vanadium make the steel very suitable for making swords, sabers and knives.

This is a technique in which steels with a difference in carbon content and thus color are produced, thus creating a pattern in the steel. These steels are welded under high temperature and the steel will bond to each other. At that time, the iron contained many impurities and the blacksmiths started folding the steel to forge it out. This operation gives the steel homogeneous properties but gives it a visible pattern. Also pieces of steel with a lot of carbon were added to make the sword harder. This was then forged and folded so that this carbon was evenly distributed over the steel. The impurities in the steel were distributed and the steel was equally strong everywhere.

Today, the steel grades are of high quality and have better properties. The swords of damask steel now mainly have appealing patterns in which the forging of these blades has been elevated to an art form.

At Samurai Katana Shop you can buy various European Medieval swords with a damask steel blade. You can also find folded Japanese katanas, but this was a completely different technique than the damask steel. The Japanese samurai swords were differentially hardened and forged from tamahagane. So there were big differences in the ways of forging, but what they both have is that the blades are very beautiful and extremely suitable for a sharp and battle ready sword.

Take a look around in our sword shop!

Below is a folded blade a Japanese katana 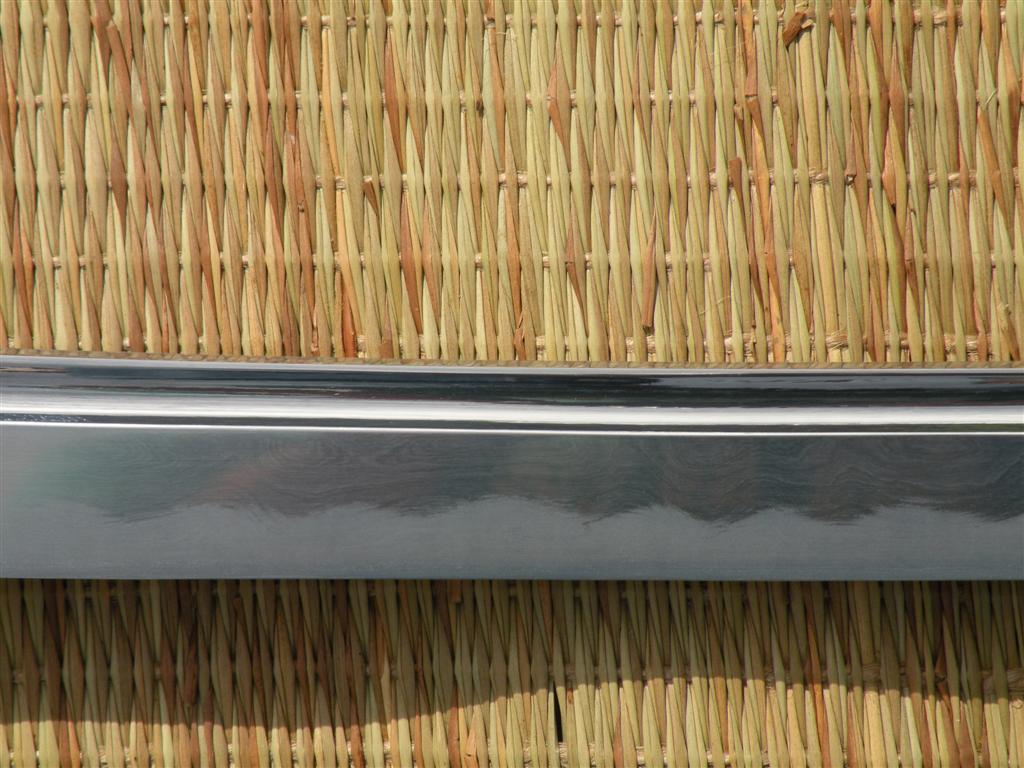