What was once a very important weapon of the Samurai has now become a great cultural symbol of strength and beauty. A Japanese sword or Samurai Sword is known in Japan as the Katana and is an important part of more than thousands of years of the Samurai legacy.

The Samurai or Samurai was the warrior class until 1868, when it was abolished and the wearing of swords in public was forbidden.

Actually, samurai means 'he who serves' and these were the armed forces of Japan from about the 12th century to the late 19th century.

The word Katana has been spread all over the world and that we can experience the profound culture of the Samurai today can only be grateful for. In that respect, a Katana is not only about the Samurai, but also the blacksmiths and feudal lords who were involved.

The Katana has gone through a long development that has great influence from the Tachi. The Tachi is a longer sword with a deep curve or curvature.

It was used by the armored samurai on horseback during the Heian period (794-1185 A.D.) and the early Muromachi period (1336 to 1392 A.D.). This hung loosely on the hips with the cut pointing toward the ground so it could be pulled quickly to take down the enemy. The tachi is an older sword also called koto. The deep curvature of the blade is very prominent and the ancient Samurai believed that there was a divine power present in their sword and protected them.

Below Tachi from Huanuo Sword Art 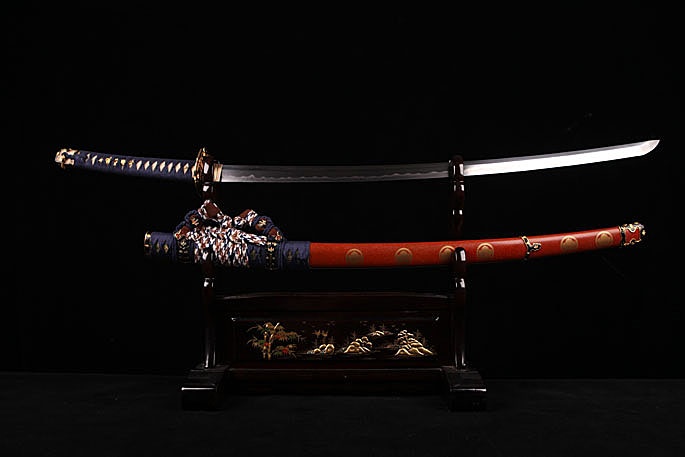 The UchiGatana or UchiKatana is a compound of two Japanese words and these are Uchi and Gatana. Uchi means to strike while Gatana is a variant of Katana and means sword. The Uchigatana was the descendant of the Tachi. Shorter and lighter, the Uchigatana was faster to handle and used for ground combat. It was designed during the Muromachi period (1333-1868). The Uchigatana was worn on the hip with the cut upwards, so it was completely different from the tachi that was more commonly used on horseback.

The pliers or nakago were also a lot shorter and were therefore also used with one hand. A difference between the Katana and Uchigatana is often the quality. A Katana is generally regarded as a higher quality sword with better tamahagane and superior craftsmanship. The forging of an Uchigatana blade was often faster and koshirae was often of lower quality.

The Katana is the most famous type of Japanese sword. If anyone could suggest a Samurai Sword, we end up with the Katana. The Japanese Katana is a traditionally made sword and, like the Uchigatana, is characterized by a single-sided curved blade with a matching tsuba.

The Mongol invasions made weapons increasingly important. The Samurai found that their swords were unable to cut through the thick leather panthers of the Mongols. This took place in 1185 and 1333. There had to be a wider and thicker sword that could be wielded with two hands.

A Katana has a relatively slightly longer handle which is suitable for both hands of the Samurai. The Tachi and Uchigatana are the inspiration for the Katana. Traditionally, Tamahagane steel was used for the blade which was hammered and folded with different amounts of carbon. An important technique was differential hardening in which the edge of the blade was covered with a thinner layer of clay. The curing and quenching process resulted in a hard and crooked blade.

The Samurai warriors gained a strong preference for using the Katana due to the speed of the draw and the stronger blade that could cut through armor better. The faster reaction time saved the lives of the Samurai in many cases.

The sword was handy to use and was worn in the obi or band with the edge up.

Below an authentic Japanese Katana

As the Tachi was often accompanied by a tanto knife, wearing a Daisho became very popular around the Muromachi period (1336 – 1573). Wearing a long sword (daisho) and short sword (shoto/wakizashi) became symbolic because those with great power or great warriors were given the honor of wearing a daisho.

Below Daisho from Thaitsuki 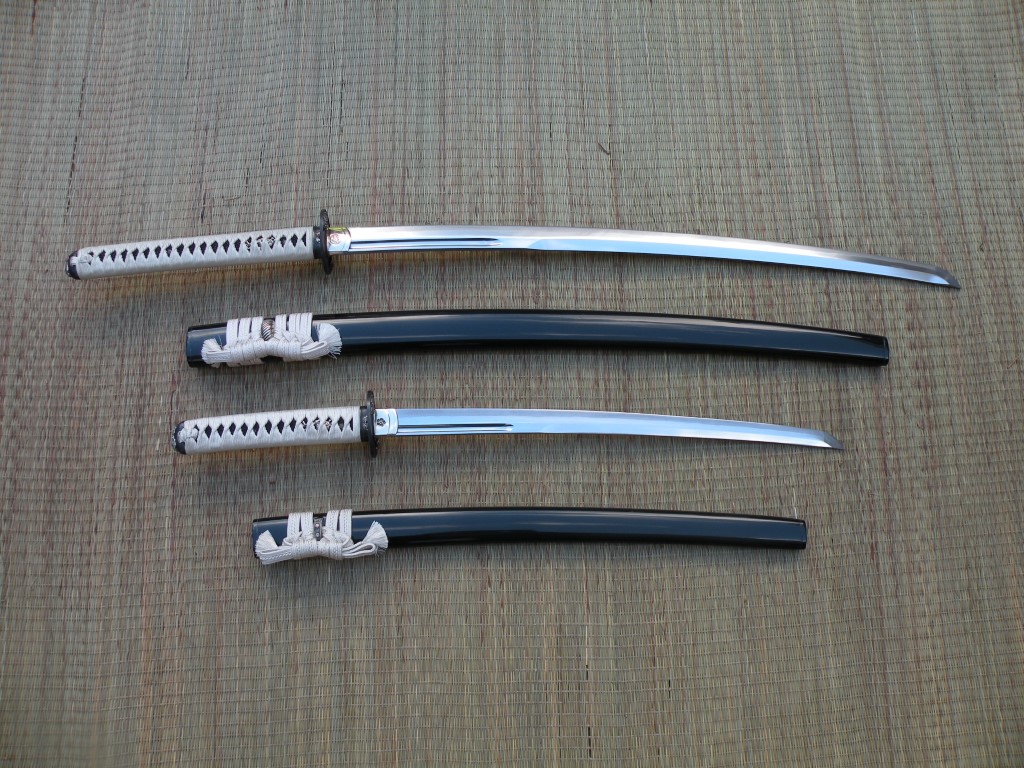 The genuine antique Japanese Katanas we sell are considered works of art and we usually have some of them in stock.

It is also possible to buy a modern katana that can be used by martial arts practitioners and collectors.