In the early Middle Ages, the Vikings were known for their looting and conquests across large parts of Europe. This happened around 780 to 1100 AD. The Vikings lived in Scandinavia and descended from the Normans, this was a branch of the Germans. The Vikings were strong warriors who plundered and murdered, but also had a rich culture. They were also traders, settlers, explorera and craftsmen who could build excellent ships. Initially, the strategy was to quickly attack and leave locations with valuables. These were often monasteries where you could find a lot of precious goods and gold. In later periods, camps were set up and  they worked from there. 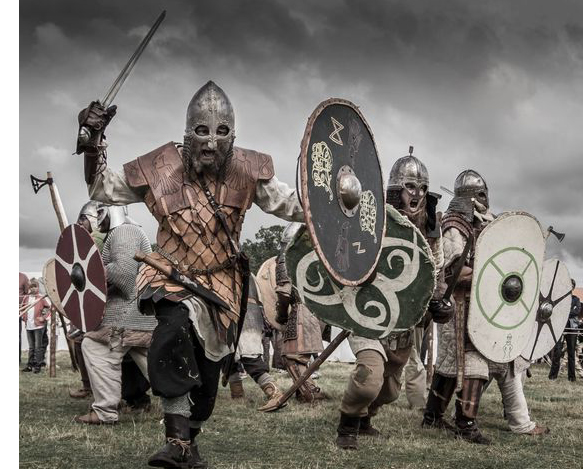 There were a few major influences from Vikings why they were  going to carry out these looting in Europe. Opposition to Charlemagne to allow themselves to be relinquished by renouncing their own habits. The Vikings considered their own cult and Norse mythology to be very important.

There were very great wars between the Frankish empire of Charlemagne and the Saxons. This war started around 772 with Charlemagne's campaign against the Saxons. The Saxon leader, Widukind, was on good terms with the Vikings or Normans.

Due to the enormous population growth and therefore also food shortage, there was a need to expand their areas and this was accompanied by looting and conquests.

The inheritance law with the Vikings is arranged in such a way that the first son was the only heir who took over all property. The young men who inherited nothing often joined the annual raids in the affluent countries.

The Vikings came from Sweden, Norway and Denmark and were active in different parts.

Overall, it can be said that the Vikings from present-day Denmark, Norway and Sweden were active south, west and east respectively. 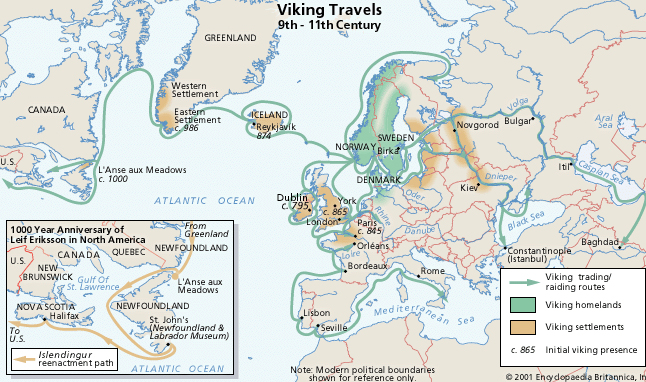 The Danish Vikings mainly went south and plundered the mainland of Western Europe. Large parts of England came into possession. They even came to the Mediterranean and the coast of France was named Normandy (Normans). Nobody could stop the Vikings because of the  weapons and strong swords with their surprise attacks. A well-known Viking was the Danish Koining Siegried, who certainly carried out various looting in the Netherlands at Dorestad (neighborhood near expensive city) and Meinerwijk near Arnhem. Pillaging and making routes unsafe caused disruptions to transport to Frankish areas. More famous Danish Vikings were King Knut, Harald Blauwtand and his son Svein Gaffelbaard.

Godfred Haraldson (first half of the ninth century) was the son of the Danish king Harald Klak. In 826, he was baptized with his parents in Mainz, with Crown Prince Lothair I being Godfred's godfather. After his baptism he remained in the retinue of Lotharius, but after 840 they disagreed and Godfred returned to Denmark.

In the year 850 Godfred robbed Dorestad with his cousin Rorik. Rorik took possession of this, while Godfred continued to feed, plunder Flanders and Artesia, and return to Denmark to hibernate.

In 851 Godfried plundered Friesland and the Rijnmonding again, sailed up the Scheldt to attack Ghent, and perhaps also the abbey of Drongen.

In 852, his father, Harald Klakk, who had been loaned to the county of Riustringen in East Frisia, was killed by East Frankish nobles and defenders of the border with Denmark, but his lord Lotharius did nothing. That is probably why Godfred, who managed to escape, took his oath of allegiance to Lothair and fled to his native country of Denmark. After wintering in Denmark, he returned again, attacked Frisia with a large fleet in 852, returned and sailed up the Seine on October 9, 852, to Pont-de-l'Arche. Charles the Bald marched to the Normans and had help from the army of Godfred's godfather Lotharius, but the Vikings had entrenched themselves on an island in the Seine near Les Andelys. The Frankish army had no boats. After the deadlock lasted all winter, Godfrey was allowed to leave in the spring of 853, probably with a sum of money. Karel de Kale also gave him a residence in his West Frankish empire. It is likely that this was the island of Walcheren, which the Danes had already acquired in 837. In 854 there was an attack on Riustringen, presumably Godfrey wanted to recapture his father's territory. An uprising also broke out in Denmark that year, killing King Horik I and putting Horik junior on the Danish throne. Because Lothair wanted to have this area ruled by his son Lothair II, the Vikings went to Denmark to seize power there after the death of Horik I. However, the pretender to the throne Rorik and Godfried returned without effect.

In 855 Godfred was with his cousin Rorik (probably the dux of Frisia), in Dorestad, as vassals of Lothair II. Godfred was left in Frisia when, after Danish looting of Dorestat and the Betuwe in 857, Rorik was ordered to sail to the Danish border to prevent the attacks. That is the last one learns in the sources of this Godfrey, and he probably died shortly afterwards.

These Vikings colonized Iceland and Greenland and discovered present-day Canada. This explorer was Leif Eriksson, the son of Erik the Red. The reason for this was mainly to provide good wood which was of great value at the time. The Norwegian Vikings mainly went to the North.

The direction of the Swedish Vikings was mainly to the east, so towards Russia and the Baltic areas. Especially the use of Rivers was very important for the merchants to transport their goods. This continued to wealthy Constantinople and to the Middle East. The Vikings also play an important role in the emergence of today's Russia. The city of Kiev was an important trading city for the Vikings, this became Kiev Russia.

The Vikings sword certainly played a major role in great victories and power they had in Europe.

An important development for the Vikings was that in addition to damask steel, mono steel was also used. The sword no longer had the stripe pattern, but the entire sword was forged from a high-quality steel with high carbon content. This also allowed forging with narrower blades which were more manageable. These Viking swords were very fast while an authentic spatha was more suitable for striking against armor. These Viking swords had had a good heat treatment (startle) with hardened steel.

With the Vikings, making a sword was very expensive and its possession brought status and honor. High status people had decorated swords inlaid with silver accents. The poorer farmers at the time often had an ax or spear. The blacksmiths were only for specialized swordsmiths or were imported from abroad. It was common then to name the swords. The Vikings were often buried with even their swords.

The scabbards of the Viking swords were usually made of wood and leather and were worn in a sword belt.

A number of important Viking swords have been found, one of which is the River Witham Viking Sword. The Viking sword was found in the river Witham opposite Monks Abbey, Lincoln. This 10th century sword, also known as the Lincoln sword, is one of the most beautiful existing Viking swords.

Several examples with the characteristic appearance of a Viking sword have also been found in the vicinity of Trondheim in Norway.

In our webshop you can buy a number of quality Viking swords, which are functional and very detailed.