Among the emperors of Japan were the three sacred treasures, the sword Kusanag, the mirror Yata no kagami and the jewel Yasakani no magatama. That the sword belonged to these is not at all surprising because in addition to being a deadly weapon, it is also an expression of art and craftsmanship.

Because of its long history, the Japanese sword is surrounded by mysticism and mystery which has risen to great heights. Traditional blacksmiths used rituals and techniques to attribute powers of spirits, gods, ancestors or natural forces to the samurai sword through Shintoism.

The sword appeared early in Japan's history and as the samurai became more important the sword represented the attitude towards life and the code of honor or bushido. The secret to successful use of the sword was not the samurai's physical strength but more the mental aspect which was formed by balance between body and mind. A large part of the training lay in strengthening the spirit which then flowed through the blade of the sword.  Meditative Zen techniques were used to relate the fear of death or pain.

Most people's imagination is captured by the Japanese sword or katana. In fact there are many types of Japanese swords that differ in size, application and shape. Also very well known are the wakizashi, odachi, nodachi and tsurugi. Apart from swords, bows (yumi), spears (yari), naginata (halberd) and kama were also used.

Because the samurai was a class in ancient Japan, carrying a sword gave it social status. The samurai was only allowed to do so in public. Certainly a katana with beautiful decorative koshirae was an expression of art and was a visible sign of wealth and status. 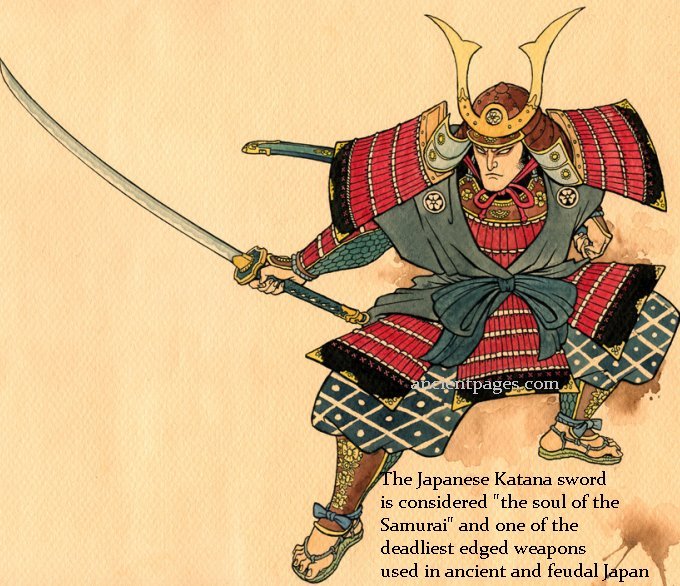 The value of the sword in Japan is also more than just the materials, it represented the history and spirits of many ancestors. You will not find this aspect in a good replica, although they sometimes, are more machine-like, undergo the same operations. The large number of old Japanese swords that still exist today in excellent condition has to do with the respect people have for the Japanese katana. From this also comes the extensive sword etiquette. This etiquette prescribes in detail how one should hold swords and how one should hand them over to someone else.

Older samurai swords were often forged from inferior raw materials and the later blacksmiths had access to better materials, techniques and knowledge that was passed down from generation to generation. Blacksmiths in Japan today have access to all these aspects and can produce high quality swords.

What makes a Japanese sword so special can also be read in Bushido: The soul of Japan. In Japan a swordsmith was not just a craftsman, but an inspired artist and his workshop a shrine. Daily he began his craft with prayer and purification, or, as the expression was, "he put his soul and spirit into forging and tempering the steel." Every swing of the blade, every dip of sword in the water, every rub on the grindstone, was a religious act of significance.

On the surface of the cold sword blade, as soon as the vapor lifts, the immaculate texture, the flashing light of a bluish hue gathers; its matchless edge, on which hang histories and possibilities; the curve of its back, which unites exquisite grace with the greatest possible strength; - all these thrill us with mixed feelings of power and beauty, of awe and fear.

Such almost poetic secrecy is connected with the forging of the Japanese sword and evokes feelings of power and beauty.

The evolution of the sword is related to the call for efficient weapons and began in Japan over 1500 years ago. The weapon had to be efficient, reliable and practical. The great challenge was to bring together two conflicting steel qualities, of hardness and flexibility into one sword blade. The blade had to be hard, so that you could sharpen a strong and sharp cut on it. But it also had to have some form of flexibility so that it could withstand blows.

Very hard steel is also brittle and fragile and the blacksmiths learned that the sword should have a core of low-carbon steel and this was then wrapped in a sheath of very hard steel. The steel that was used back then is called tamahagane. This was made in a Tatara, or traditional Japanese clay oven. One used for this, and still does, iron sand or satetsu. The iron sand is melted in the tatara for three days and three nights.

The temperature in it is approximately between 1300° and 1500°C and measures about three meters long by one meter wide and two meters high. The iron sand sinks to the bottom of the tatara and in this process carbon and charcoal will bind with the melting iron. The raw steel from this is called tamhagane.

The blacksmith receives different parts of tamahagane with higher and lower carbon content, this was then used for the core or cut.

Below a drawing of a tatara 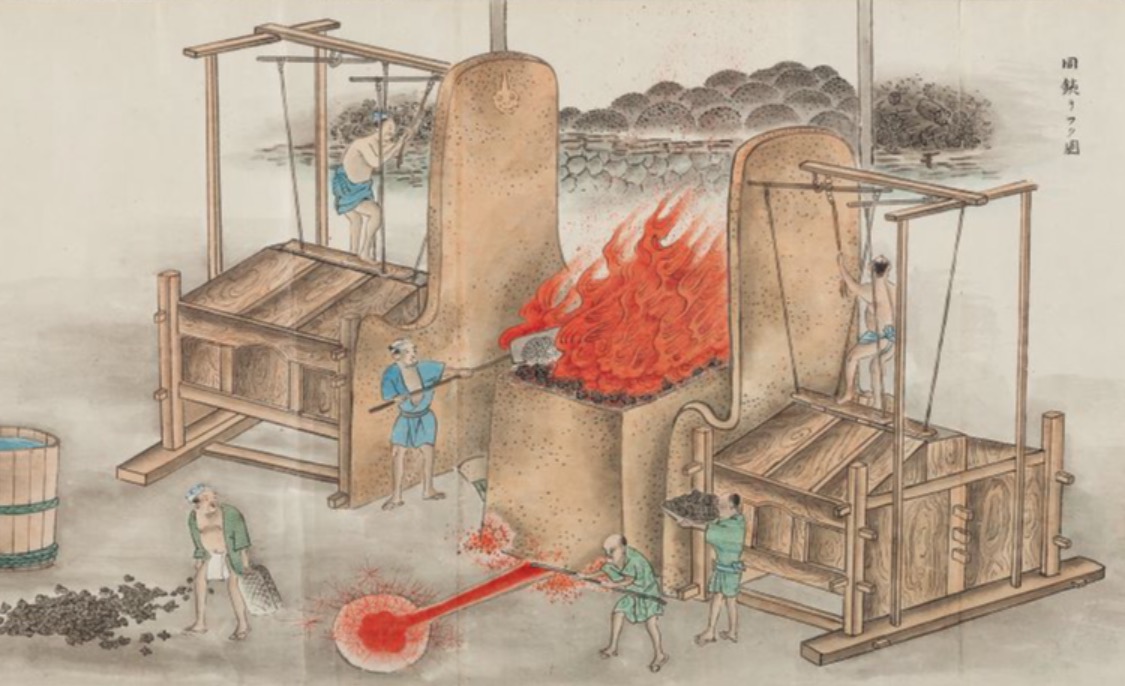 The aesthetic pattern of the hardened cut is also called the hamon and has an intimidating element because it reflects the power of the deadly weapon. A good sword has a beautiful color and texture and the blade a folding pattern with dense seams.

Originally the techniques of making swords probably came to Japan through China and Korea but during the heian period (794 - 1185) it took off. The first swords found are called chokuto. These were straight swords with a single cut.

After combat evolved to on horseback another type of sword became more efficient. This was the tachi. On horseback, more cutting combat techniques were used and the shape became completely different. The Japanese sword was relatively long with a strong curve or curvature and could also be held in 1 hand. Carrying was with the edge down and that is why you often put a tachi with the edge up on a stand.

The hamon also developed great and ashi became visible on the blades. These are streaks of softer steel that are inside the hamon and ensured that the damage was limited on the hamon with high impact blows. The part of the hamon would break out so that the sword would not break and you could continue to fight. In those days these kinds of nuances were the difference between life and death and profit or loss. This period in Japan is called koto (ancient swords).

In the Kamakura period (1185 - 1333) the samurai class were the rulers and the forging of swords reached an even higher level. Great influence on swords also came from the Mongols' attempts to invade Japan. The use of the tanto or knife then became widespread within Japan. The swords then became much thicker and more robust for proper weaponry.

During the nabokucho period (1333 - 1192) the five major schools came into being, these are called the gokaden. The Soshu School, Bizen School, Yamashiro School, Yamato School and Mino School. Of these, the Bizen School was the most active, it had access to good resources and was situationally perfect for commercial purposes.

During the muromachi period (1392 - 1568) there was great unrest in Japan and the demand for weapons and swords increased considerably. In this period the uchigatana was introduced, these were swords with a curve that were also carried with the blade upwards and were much more efficient due to the shorter length and great speed.  The uchigatana was used in conjunction with the tachi. The smooth and fast techniques of the uchigatana can be found in battojutsu, iaijutsu and iaido.

In the period that now came, the momoyama (1568 - 1603) the katana (longsword) and wakizashi (short sword) were introduced, these were carried together in the obi until the samurai class was banned. The swords were forged quite differently, with a wider hamon and different color steel. The different color steel had to do with the fact that the iron ore was often of better quality and the ways of forging were getting better and better. Because a sword in this period could not easily be traced to one of the five traditional schools (gokaden), this period is also called shinto or the sixth school.

The smiths were organized into guilds and no longer worked individually. During this period, the possession of a katana was forbidden to peasants and normal people and this resulted in a period of peace and tranquility. The level of Japanese swords went up due to the many tataras that produced very high quality tamahagane. The edo period which started around 1603 is known for the high quality swords that were produced. Blacksmiths at that time were mostly poor people and had a hard time making ends meet.

Around 1780 there was a revival of the old koto swords from the kamakura period and the techniques of the five sword schools. New techniques were also tried and introduced, these we call the shinshinto blades (new new swords).

During the Meiji Restoration (or Meiji ishin) with the political upheaval that marked the end of the rule of the warlords in Japan in 1867, the samurai class was banned.  Wearing swords in public was banned and this was a huge blow to the many blacksmiths who were already struggling.

In our webshop you can buy a quality Japanese Katana and we also have a small selection of authentic antique swords (Nihonto) imported from Japan.